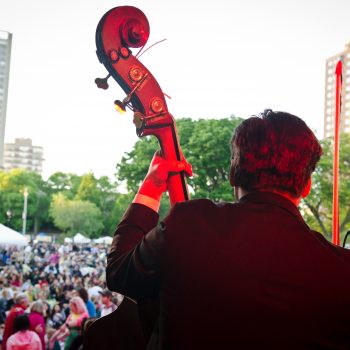 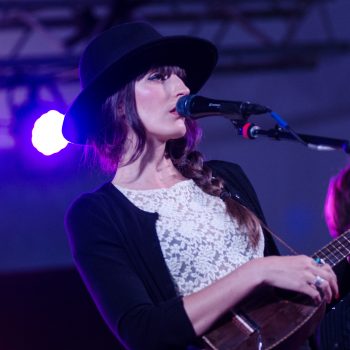 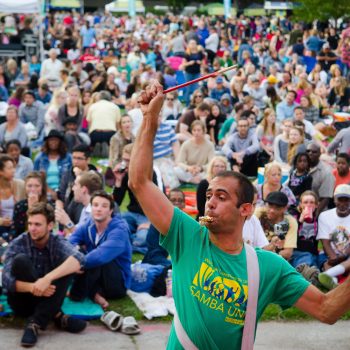 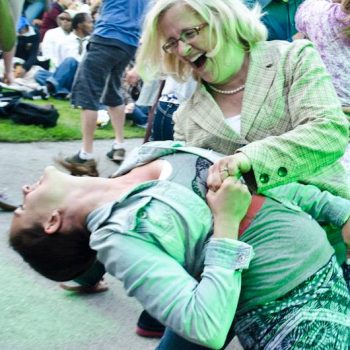 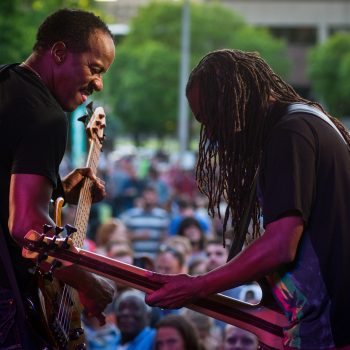 For its fourth album, Charmed & Dangerous, the Milwaukee-based quintet joined forces with Blind Pig Records, one of the world’s premiere blues labels. Produced by multi-Grammy-winner Tom Hambridge, the 13 tracks of original, contemporary blues prove worthy of the recent groundswell of acclaim. American Blues Scene proclaimed the album, “will be making huge waves… one of the year’s best!” The title track hit #1 on the Roots Music Report Blues Chart, is in regular rotation on SiriusXM’s Bluesville, and won “Song of the Year” at the 2018 Wisconsin Music Awards. The band was nominated for a prestigious Blues Music Award in the category of “Best Emerging Artist Album,” and recently won its second WAMI for “Blues Artist of the Year.” It’s 2014 album, Cryin’ Mercy, also won “Best Self-Released Album” at the International Blues Challenge.

Paul Cebar Tomorrow Sound bring forth a funky, lyrically charged racket that is explosive, yet intimate. Taking cues from the dance bands of western Louisiana (and his native Midwest,), the streets (and 45’s) of New Orleans, touring African and Caribbean combos and the soul, funk & blues of his youth, Paul Cebar is a masterful synthesist of rhythmic culture. His time spent in his second home of New Orleans, as a musicologist in Florida, and as a journeyman wanderer in Cuba, is reflected in his musical worldview. At the core is gifted songwriting, and the company Paul keeps bears it out: Bonnie Raitt, Nick Lowe, Chris Smither, John Hiatt and Cesar Rosas are among his friends and admirers. Tomorrow Sound are an elite crew. Drummer Reggie Bordeaux, New Orleans native percussionist Mac Perkins, and bassist Mike Fredrickson, throw down some of the best dance grooves in the business. Multi instrumentalist Bob Jennings adds the luxury of implying a much larger ensemble with his multi hued contributions on keys and reeds. Paul Cebar Tomorrow Sound’s latest album, “Fine Rude Thing” is out now. The songs “Baby Shake” and “You Owe it to Me” feature Cebar’s unique mixture of R&B, Caribbean and New Orleans

The Bonifas electric Band was formed by veteran jazz guitarist Bill Bonifas to feature Grammy award winning trumpeter Brian Lynch for a very special concert at Jazz in the Park in 2017. Brian joined Bill in the jazz-fusion portion of a night dedicated to the legends of Milwaukee Jazz with earlier sets featuring an array of great Milwaukee performers such as Manty Ellis and Mark Davis to name only a few. At that performance the band was seen by the members Milwaukee Ballet who loved the interaction of the elegant trumpet with the edgy rock guitar and the overall fusion sound. The Ballet requested the band perform original music with them at a ballet which took place in early 2018. Besides Bill, the ensemble includes Theo Merriweather on keyboards, Eric Hervey on bass and Dave Bayles on drums. When Brian is touring elsewhere, Milwaukee’s Eric Jacobson brings his own special gift to the original music composed by bill and Eric will be featured at the upcoming show at Jazz in the Park.

Radio Free Honduras is a diverse collective of Chicago musicians, all united under one goal: supporting the artistry of Charlie Baran, formerly of legendary Banda Blanca, and bringing his tremendous talent into the spotlight where it belongs. Founded by Dan Abu-Absi, longtime guitarist for JT and the Clouds and Birds of Chicago, Radio Free Honduras plays mostly Baran originals, but their live shows often feature a wide variety of reimagined cover songs.

Abu-Absi has gathered a large, revolving collective of some of Chicago’s most talented musicians; lively percussion, eclectic instrumentation, and rich harmonies all provide the backdrop, allowing Charlie to do what he does best – stunning guitar work, tapping into what seems a limitless supply of energy and enthusiasm for music.

Night after night at their live shows, Josh Hoyer & Soul Colossal leave it all on the table, bringing crowds palpably authentic music. This is a real working band; music for the people, by the people. You hear the veracity in Hoyer’s voice. You hear the strife of a guitar amp being pushed to its limits. You hear keyboards hammering notes home while emboldened horns soar over the top of a rhythm section akin to a freight train. The raucous funk and smooth soul emanating from the stage dutifully pays homage to the past soul giants while simultaneously charging forward, piloting themselves into the modern era. This is soul music.
Hoyer formed Josh Hoyer & Soul Colossal in 2012 in famed blues town Lincoln, Nebraska. The award-winning five-piece band includes some of the area’s most revered and accomplished musicians. Joining Hoyer (keyboards/vocals) is Blake DeForest (trumpet), Mike Keeling (bass), Benjamin Kushner (guitar), and Larell Ware (drums). Inspired by the sounds of Stax, Motown, Muscle Shoals, New Orleans, Philly and San Francisco, the band continuously crosses musical boundaries both in style and era, and joins forces each show with a common goal – to have the crowd dancing so much they forget even their smallest troubles.

Drew Baldridge is known for his country eclecticism and musical ingenuity that have scored him more than thirty million listens on Spotify and multiple national tours. This July, he’ll be stopping in Milwaukee for the very first country night at Jazz in the Park.

THE JIMMYS combine the seasoned keyboard and Hammond B-3 organ talents of Jimmy Voegeli, the legendary blues guitarist Perry Weber on six-strings and vocals, drummer Chris Sandoval – veteran of the Tommy Castro band, the expertise of southern Wisconsin’s finest bass guitar, and rounded out by an amazing horn section!

The refreshing sound of Plaid Hawaii, which finds a blissful balance between digital and live instrumentation, can best be described as “tropidelic”. Musical selections, remixes and original productions with elements of House, Indie Dance, Psychedelic and Funk are all blended into an evolving breath of music to create an upbeat and sexy live set. A Milwaukee native, Plaid Hawaii (aka Jason Womp) has been featured at numerous major music festivals and has shared the stage with many established artists across many genres such as Odesza, GRiZ, Sam Feldt, Petit Biscuit, Matoma, Illenium, Cherub, RL Grime, Klingande, Phutureprimitive, Sunsquabi and Manic Focus. Between his extraordinary ability to adapt to any type of set and by constantly seeking to capture an emotion, rather than jumping on whatever style is trending right now; Jason’s vision and following hasn’t stopped building momentum since day one.

The Claudettes fuse Chicago piano blues with the full-throttle energy of rockabilly and punk and the sultriness of ’60s soul to write a thrilling new chapter in American roots music. Johnny Iguana pounds the piano alongside seductive singer Berit Ulseth, bassist/guitarist/singer Zach Verdoorn and drummer Michael Caskey. Johnny, who toured for years with his cult-favorite rock band oh my god, is also in the Grammy-nominated groups Chicago Blues: A Living History and the Muddy Waters 100 Band. He has toured/recorded with Junior Wells, Buddy Guy, Otis Rush and more and played piano on the Chicago Plays the Stones album featuring Mick Jagger, Keith Richards and Buddy Guy. The Claudettes recorded their 2018 album “DANCE SCANDAL AT THE GYMNNASIUM!” with Grammy-winning Black Keys producer Mark Neill and have recorded a new album with Grammy-winning producer Ted Hutt (Old Crow Medicine Show, Gaslight Anthem, The Devil Makes Three).

Songwriter/artist Abby Anderson is slated to open as direct support for Rob Thomas on Thomas’s 44-date Chip Tooth Smile Tour, kicking off on May 28th in Red Bank, NJ and running through August 4th with stops in New York, Los Angeles, and Nashville. Additionally, Anderson is confirmed to perform at multiple music festivals this summer including Stagecoach, Off the Rails, Country Thunder, and Tortuga. Marking her first appearance, the Black River Entertainment artist made her debut performance at C2C in London on March 8th. Teaming up with fellow country newcomer Jimmie Allen, Anderson and Allen released their cover of “Shallow” from the Oscar-nominated film A Star is Born. Watch the music video here. Named one of The Bobby Bones Show’s “Class of 2019,” Anderson is also one of MusicRow’s “Next Big Thing for 2019,” and is included in Sounds Like Nashville’s “19 New Country Artists to Watch in 2019.” Since the release of her debut EP I’m Good, Anderson has earned over 25 million streams, caught the attention of fans worldwide and has had the privilege to open for some of Country’s brightest stars including Kelsea Ballerini, Bobby Bones, Billy Currington, Devin Dawson, Russell Dickerson, Brett Eldredge, Walker Hayes, Chase Rice, and more.

The Eddie Butts Band delights audiences at festivals, concerts, night clubs, weddings, and many other corporate and private entertainment events throughout the Midwest, delivering an exciting blend of R&B, pop, jazz, and more. Eddie is well known as a premier vocalist, and when you combine his smoky baritone with the highly-praised musicianship and vocal talents of this polished and professional band, it is easy to see why the Eddie Butts Band is considered a must-see — and must have — favorite. 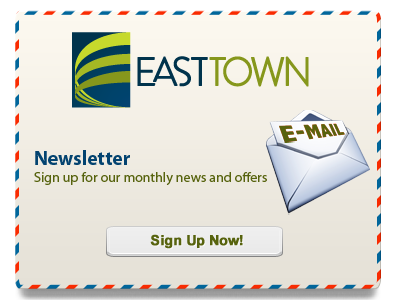